“Life has given me a window to relish every moment. It offers not just interesting sights, but opportunities to participate in meaningful ways that excite me.  I am a content developer, I write books and edit manuscripts for the publisher, a dancer, a mother of two children and a loving wife, I await, in all humility, for more surprises that life has to offer.” – Meera 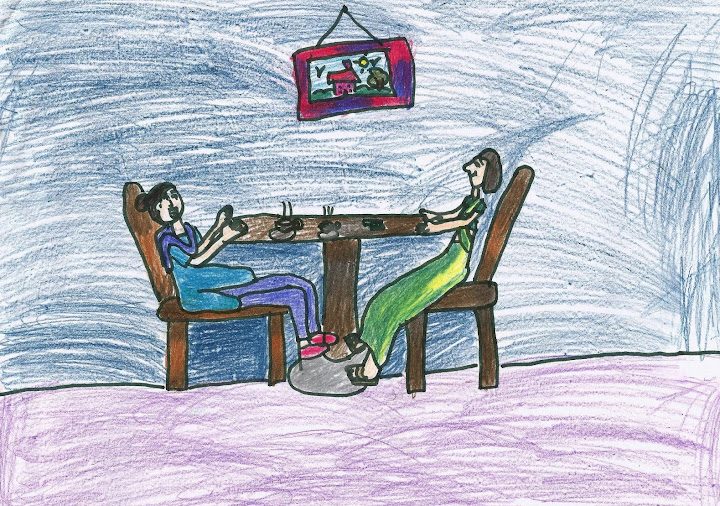 “Did you hear?” Mini, short for Mrinalini, asked her friend Lakshmi. “Nandu’s niece has left her husband…”
“Really!” Lakshmi perked up. “Why? Hadn’t she run away with that man?”
“Yes, a different community too! I remember her parents were upset. Nandu had to intervene,” Mini smirked and Lakshmi winked. “All that for nothing!”
“Today’s youth… they don’t want to spare a thought. Just jump in and jump out!” Lakshmi complained. “Even my neighbour’s daughter divorced her husband because he was moving cities too often, disrupting her career.” She shrugged. “Really, I don’t know… I remember my mother packing bags and following my father through big and small cities when he was in government service…”
“Ya!” Mini replied eagerly. “See my own daughter-in-law! She is upset with my son because he refuses to go abroad. He thinks he is doing fine here… But she wants them to be abroad. They are seeing a counselor…” she grimaced. “When we elders try to intervene, they don’t like it…”

“So what’s Nandu’s niece’s story? Her name is Mala, right?”
Mini nodded. “I don’t know. But I know he is unwell…”
“Oh! She left him because he is unwell?”
“Nandu didn’t say much… Just that he has some debilitating condition. I thought it was very unfair. To marry when he was healthy and handsome and to leave him the moment he fell sick. I didn’t tell Nandu anything, she seemed to think her niece had escaped in time… I was surprised, you  know…” Mini gave vent to her feelings.
“Really!” Lakshmi’s eyes widened in surprise. “Hmmm… That’s really sad. What happened to ‘through joys and sorrows’? My husband has been so difficult of late. The lower back pain has been killing him and he snaps at everyone. Even I feel like walking out sometimes. But we have had such good times together, how can I just leave him?”
“Exactly, Lakshmi! You know how my husband would shout because of stomach pain. When we discovered he had cancer, he just crumbled. He was in so much pain, I would run away! My son only took him for the treatment. I couldn’t stand it, you know!”
“Ya Mini, I don’t know how you went through it. You even stopped coming for kitty parties initially, I remember!”
Mini nodded, her face puckered as she remember those days. “But look at girls these days… Leaving the moment they sense trouble…”
Lakshmi sighed. “Who told you about Mala?”
“Nandu only. She was in Mala’s parents’ home at that time. Said she will to talk later.”
“Did she?” Lakshmi asked, jealous that Mini should know the latest before she did.
“No…”
“Let me call her. It has been a while since I spoke to her. In case she needs any help…” Lakshmi dialed. Mini pulled her chair closer. She became impatient as the conversation seemed to drift away to their next kitty party. Finally Lakshmi asked, “So how is family. All well?”
Lakshmi made faces at Mini as Nandu spoke about her immediate family and the usual woes. Finally, unable to stop herself, Lakshmi said, “Hey, is your niece Mala still in Madurai?”
“…”
“Oh, not Madurai…? … Oh, what happened? … Really?” Lakshmi made appropriate noises. When she cut the call finally, her eyes expressed horror.
“That man… he started beating Mala,” she blurted out. “As the disease progressed, some muscular disability that affected his lower part, he started suspecting Mala and would abuse her mentally and hit her if he could get his hands on her. When she ran away from him once, he flung a knife that lay next to him…! Oh the poor girl! Luckily she took it on her shoulder. Now her parents have forbidden her from returning to that man…” She looked at Mini, feeling guilty about their assumptions.
“Oh these young people,” replied the indefatigable Mini. “They cannot handle their illnesses. Not once did a cross word cross my husband’s lips when he was unwell,” she said.

1 thought on “These Young People”