This is the first of a series of short articles on Economics with an intention to demystify various basic terms and concepts related to Economics that we encounter everyday in news papers and other media forums as well as our conversations. And yet, these terms and concepts may not have been entirely clear to some of us. This, on a macro level, allows a leeway to governments and the corporate sector to mislead us into believing wrong information regarding development and our own socio-economic welfare. Dear reader, we will be happy to receive your feedback against this series.

Read the second article in this series here.

The Modi government has ostensibly won the support of a large proportion of the Indian population on its promise to increase India’s economic growth. This promise, however, is not unique to the current government, but has featured in the top priorities of many governments at least since the 1990s. But how do we understand economic growth? 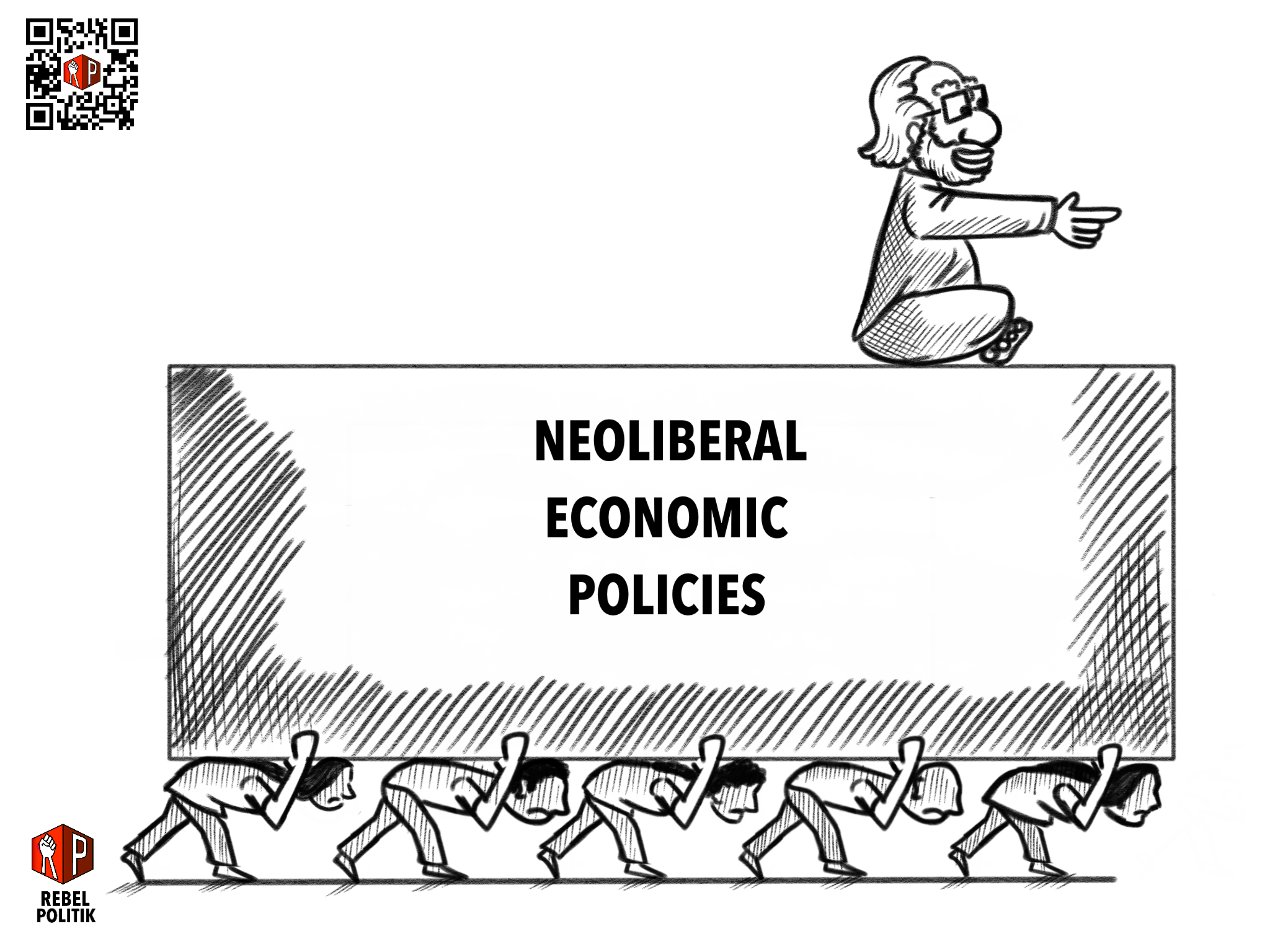 What is economic growth? What does it measure?

In order to understand economic growth, we must first grasp the concept of GDP (gross national product), which quantifies the level of economic activity in any nation. In India, the Central Statistical Organisation (CSO) estimates GDP. Specifically, GDP attempts to measure the rupee value of economic activity measured in terms of goods and services produced for the final consumer in a particular year, which means multiplying the price of a particular final good or service in a particular year and multiplying it by the quantity in the same year and summing this value across all final goods and services. This gives us what is known as nominal GDP. Calculating the rupee value of economic activity for the ‘final consumer’ eliminates the problem of double counting.

To explain double counting and final consumer, let us suppose that Steel Authority of India (SAIL) manufactures a certain quantity of steel in 2016 and sells it to Hero Honda which then produces a certain number of motorcycles with that steel in the same year. If we were to count the rupee value of all sales in 2016, the value of steel would be counted twice, once in terms of the steel produced and sold by SAIL, and the second time in the market value embodied in the motorcycle produced and sold by Hero Honda. Hence, in order to eliminate this double counting, GDP only counts the rupee value of all recorded market exchanges of final goods and services like the motorcycles and not the steel. To be counted as a final good, the motorcycle has to be consumed by the final consumer like you and I, not the restaurant that purchases the motorcycle to produce the service of delivering food to consumers. In other words, GDP is calculated using value added.

GDP, or what economists refer to nominal GDP, however, could provide us with a less than accurate picture of the economy over time. Remember that nominal GDP is calculated by multiplying current year’s price and quantity and summing the value across all final goods. Therefore, an increase in prices over the years could increase nominal GDP even if there is no change in actual goods and services produced in the economy. Comparing nominal GDP across years does not tell us whether the change in GDP is due to a change in prices or a change in the final goods and services produced. However, calculating real GDP (also known as GDP at constant prices) instead controls for an increase or decrease in the general price level across time, also known as inflation and deflation, respectively.

In order to calculate real GDP, we choose a base year. Let us designate this as 2009-10. To calculate real GDP for 2010-11, we would adjust nominal GDP for a particular year using a price index for the base year. A price index is an aggregate measure of prices of a standardized set of goods and services in a particular time period. This adjustment has the effect of keeping prices constant but allowing us to infer changes in production. If real GDP in 2010-11 is greater than real GDP in 2009-2010, we can attribute this to an increase in the quantity of final goods and services produced in 2010-11 rather than an increase in the price level. If real GDP in 2010-11 is lower than the real GDP in 2009-10, it is because of a decrease in economic activities rather than changes in the price levels. Calculating real GDP makes comparison across years meaningful as long as they have the same base year.

Economic growth rate then, very simply, is the percentage change in real GDP over a period of time. It is used as a primary indicator of the health of an economy, and is assumed to reflect the welfare of the nation and benefits reaped by its citizens. It constitutes the primary language of economic reporting and debate. Despite claims to objectivity, however, the calculation of GDP assumes a certain level of abstraction that can be manipulated to obfuscate our understanding of economic reality. For instance, many believe that a high economic growth rate reflects an increase in jobs and a standard of living. We will explore this assumption in the next part of the series, but for now let us investigate some aspects of the mechanics of measuring the GDP.

First, real GDP and hence GDP growth rates are dependent on the base year, the selection of which is arbitrary and subject to few conditions. Relatedly, the selection of the measure that reflects the price level of the base year also matters. Without getting into too much detail, it is sufficient to bear in mind that some price indices (aggregate measure of price levels) will yield real GDP figures larger than others. Successive central governments have attempted to represent higher real GDP and growth rate figures by changing the base year and using price indices that are favourable to the narrative that they want to adopt. This is usually done without adequately qualifying the subjective and variable nature of GDP calculations. For instance, in January 2015 the Indian government revised GDP estimates for 2013-14 from 4.7% using the base year 2004-05 to 6.9% using the base year 2011-12! Rather than representing an increase in growth rate, it merely indicates a change in the method of calculation. 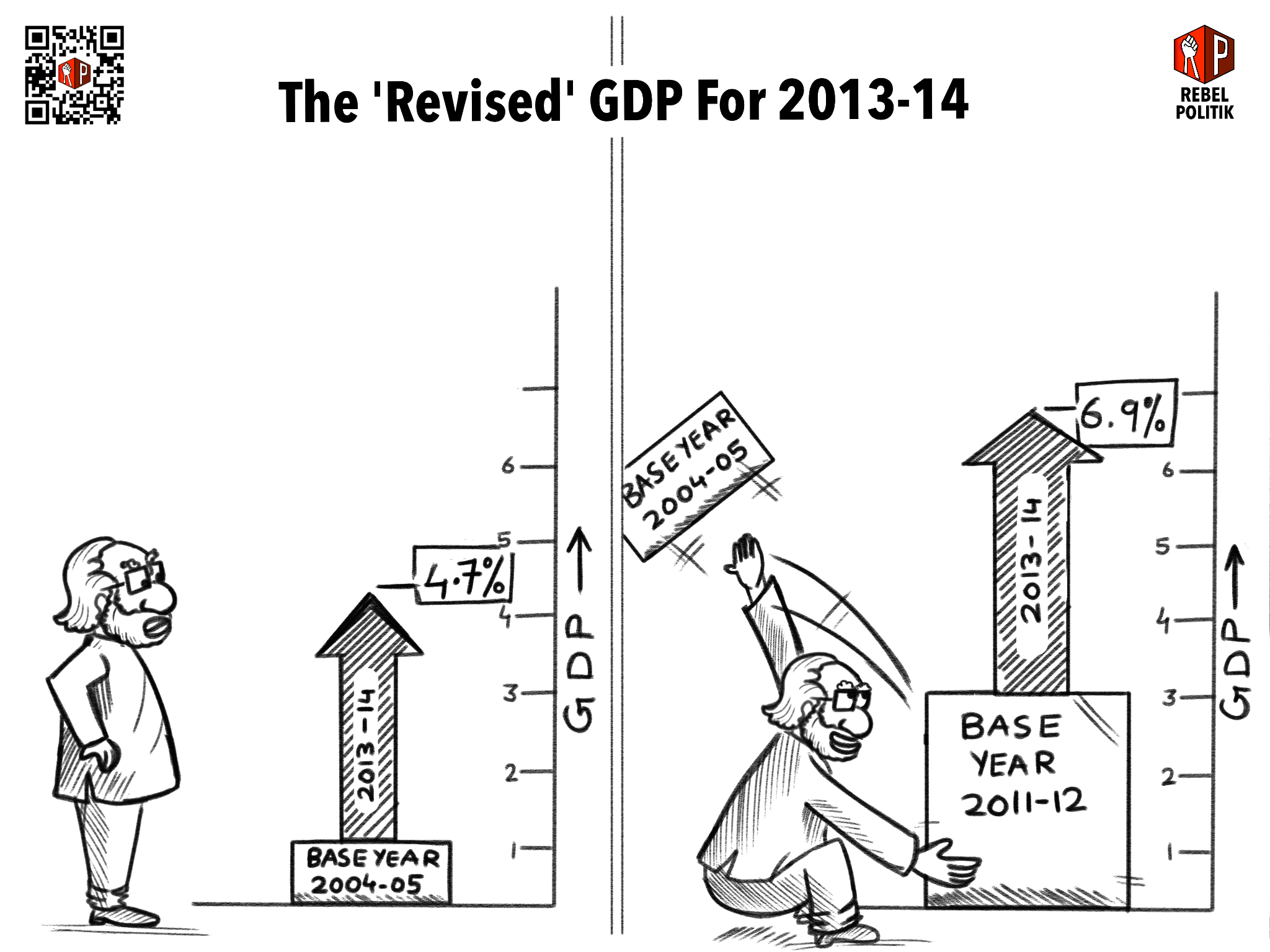 Second, tying the calculation of GDP to price and markets has far-reaching implications. Consider this scenario. Malathi has two children. If she requests her friend Ajay to take care of her children for a few hours a day without any compensation, the GDP does not change. However, if Malathi pays Ajay for the same amount of work and Ajay reports this amount in his taxes, then GDP increases. So it is not the value of Ajay’s labour to Malathi and her family that is counted in GDP calculations, but the commodification and monetisation of this economic activity. The monetisation increases the value of GDP and contributes to economic growth even though there has been no change in the value of goods and services actually produced in the economy. This is true of the housework performed by many women in Indian households, even though the same work performed by a day care centre or a restaurant or a professional cleaning service is included in GDP.

Thus, India’s GDP estimates are subject to significant under-measurement which makes them unreliable. This is also true of countries in North America and Europe. According to one estimate, the value of unpaid housework in the U.S. economy amounted to 26% of US GDP in 2010. While the U.S. does not officially offer the value of such work, some other countries supplement GDP measures with official estimates of the value of unpaid housework and other activities not captured by the GDP.

In other words, the GDP only accounts for items of commerce that add to the national well-being, whereas those that do not involve money are devalued. The emphasis on commodification most significantly leaves out the realms of family, community and environment even though they are crucial for economic well-being. The significant flaws of GDP calculation also justifies the forcible conversion of land and nature to other industrial uses that benefit the commodified economy and ignores the costs to life and livelihoods of some of the most marginalized people in the country, an issue we will explore in a later article.

4 thoughts on “Series on Indian Economics by Sirisha Naidu: 1. The Travails Of Economic Growth”