I have reasons to believe that ‘what is good art?‘ is one of those disturbing, annoying unanswerable questions, whose level of unanswerability stretches beyond questions like ‘is there a god?’ or ‘are there infinite number of twin primes?‘. Disturbing – because the question is inevitable – there is no escape from it – our experiences, thoughts and perceptions being continuously tingled and tampered with by images, dialogues, music and movements. Annoying – because it is a fuzzily qualitative question presented in a yes-no context. More so, because somehow we take it for granted that mystic questions such as the existence of gods or prime numbers are to be explored by the chosen ones whereas each of us has a right to announce sermons and declarations regarding art, instigated by culture that we are used to – guided by the little lazy critique present in each of our hearts, dying to blurt out opinions, with absolute disregard for the history or the process, through which an artwork emerges.
That was the initial angry bit. Now a few nice words for Indianostrum – my favourite theater troupe based in Pondicherry. Last month Rangashankara (Bangalore) organized a multilingual theater festival (A New Generation Directs Girish Karnad) with nine plays, an assortment of clips of plays and discussions on eminent playwright/actor/writer/director Girish Karnad. Among other performances, all of which were more or less appreciably and skillfully presented, it was the performance of ‘Dreams of Tipu Sultan‘ by Indianostrum that led the audience to the controversy of good or bad art most explicitly. 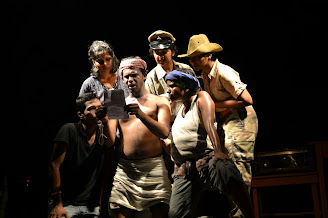 I always thought Koumarane – the founder director of Indianostrum – is quite insane, but that has naturally been his charm and the biggest selling point of his plays. However seeing his troupe as part of the Chennai theater audience (which is more like a home ground to Indianostrum) for last few years, I had never experienced the savage and almost naive dislike expressed by a part of the Rangashankara audience, directed at the same insanity that differentiates Indianostrum from other theater groups.

First of all, Indianostrum did not follow Karnad’s script, except for a continuous rendering of the original play in the BBC channel, at a malfunctioning radio player (incidentally, this particular play was written by Karnad for BBC radio channel, which was of course – the whole point behind playing it in the background from a radio). In short, the play unfolds in a city police station inhabited by a couple of policemen, a tea seller and a few petty criminals, on August 14 – night before independence day celebration of the year 2013. A listless man enters with a mysterious sack, refuses to give his identity except claiming to be known as Tipu Sultan – in fact refuses to pronounce anything other than occasional dialogues (from the original play) and once, a beautifully sung verse of Rumi. 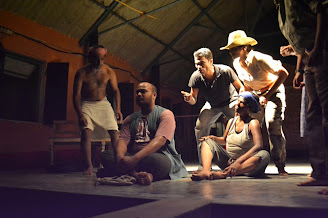 As it goes, the actors eventually come to know of a bomb blast that has taken place within the past hour and end up deciding that this strange man – being a Muslim as claimed by himself – must have been the terrorist, who is on the run after causing the blast, and all of a sudden, the paranoia and the greed to kill, transform the so far comic faces. They condemn the silent man to death through a people’s court set by themselves and hangs him in the police station.
Here comes the second and more obvious part of the controversy, where the hanged man defecates and the court starts playing with the pieces of shit. This goes on with occasional dances with various patriotic songs turning into bollywood item numbers, till the radio play comes to an end and BBC puts a call to the director of the play so as to allow the British audience communicate with him. A mobile phone starts ringing in the pocket of the hanged man who claimed to be Tipu Sultan, and soon the play comes to an end as realization dawns upon the actors and they decide to make it look like a suicide by famous playwright Girish Karnad.
Koumarane had touched upon many subjects in this play – the issue of religious minority in India and its relation to mass paranoia regarding terrorism, the infamous lack of solidarity in the Indian political arena (in this case, both Tipu Sultan – the original and the Tipu – the Karnad being betrayed by his fellow countrymen, whom he entrusted with his life and work), the idolization and celebritization of personalities and at the same time the sheer ignorance and disregard for the reason behind it, and even the issue of gender, which I always appreciate a lot in his work though I am not sure if it is done consciously or just instinctively, through distributing roles irrespective of gender. For example, in this play the policemen were all performed by women actors (in their earlier work ‘Alfonsina‘, the lead female role was done by a male actor – for no apparent reason – but it had its effects; in ‘Madhavi‘ gender prototype was ripped apart), the tea-seller was a woman etc. As in their other pieces, language was kept flexible – an amalgamation of English, Hindi, Tamil, Telegu and Kannada. 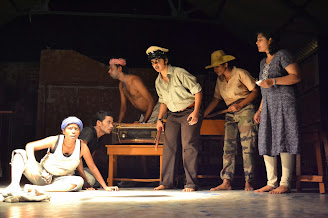 In spite of the varied issues, the politics of the play remained quite naive and direct, whereas the stage decoration and management were as clever as ever, the quality of acting – effortless, intense, dialogues – crisp and funny. But the biggest credit for Indianostrum, to my perception, was the fact that they thought, researched, spent their time and actually presented Karnad through the eyes of a contemporary generation, instead of creating a reproduction, which is after all a classical approach, however suavely done. However a large part of the audience did not think so, as it became clear in the post-performance discussion session inaugurated by Arundhati Nag.
The shit was of course a problem for them – was there a need? Well hanged men defecate (after all directors like Kieslowski have used that in his work), but was there a need to play with it? I personally felt it matched perfectly with the goriness of the whole inhuman situation that was being portrayed, but however, what surprised me more was that ‘Shit’ is most probably the most frequently used form of slang in our everyday conversation. Moreover it has its own tradition of having been used in not just films but various forms of art. Why are we still so apathetic to the object – specially at involving it within a piece of art (I cannot go into the whole long history of excrement being used in art here – but shit has always been related to demonstration of violence, possession and power in art and in reality; remember the increasingly disturbing circle of manias, circle of shit and circle of blood)? A natural parallel would be that the other most casually used western slang in India these days is ‘fuck’, though that very act is in no way considered a casual one – which brings me to the other allusion –
Larry Flynt: Which is more obscene? Sex or war? I think the real obscenity comes from raising our youth to believe that sex is bad and ugly and dirty, and yet it is heroic to go spill guts and blood in the most ghastly manner in the name of humanity.
People vs. Larry Flynt was all about good art, bad art. In Flynt’s world, the government – the great warrior government of the United States in that case – could not decide for people whether Santa Claus going ho-ho over his penis was moral or not. Any given group of people cannot ever decide for another group which art should exist and which should not. What was a bit shocking to me that a part of Rangashankara audience was not merely expressing its views, but they were declaring verdicts on the troupe, almost claiming as if the troupe forced them to sit and watch (though Rangashankara never locks their exit gates while the play is on), what was just bad art. Using ‘Islamophobia’ just by itself, one way or the other, is a lucrative business in Indian art scenario. But in this case, firstly, it was a declassification of Karnad – a cultural celebrity – an unviolatable (read violation as reinterpretation, research) field in Indian field of arts; secondly, it was not made easy for the audience by using a unified language (this is a demand Koumarane has been steadily neglecting for long – he tends to allow language only when it comes naturally to the situation and the actor, and more often than not, it does not bar an attentive audience to get the hang of what is being said); thirdly it was the shit; and finally it was the money! At least ten different people complained that they lost two hundred rupees (ticket price at bookmyshow.com) in vain and felt cheated at having to see a production by a random troupe – however closely related to Karnad’s play.
Indianostrum seemed to be in a better humour than me regarding these questions. They sincerely and humbly maintained a one line answer that I could have mentioned in the first place instead of elaborating on my irritation – that one could at worst not like a play, or at best like it, and that was all the right that an audience had regarding a piece of art, nothing more. When after about half an hour of heated accusations, an elderly man sweetly said, but one could not deny that he had come to see Karnad’s Dreams of Tipu Sultan and etc., Koumarane said in his thick Tam-French accent – but Sir, did you really really not like the play at all? The man was clearly a bit embarrassed and he said – no, not that, but, and Koumarane said – Sir then…
As always it was good to see that Indianostrum is slowly building up a certain signature in Indian theater, not by always being entertaining, or even good, but by thinking non-linearly and contemporarily. The general lack of freedom in exercising art in India might be a relevant enough problem to a very selective group of people – artists and audience, but that does not make it a less important issue, because it is closely related to that of the camouflaged dictatorial approach we have towards every single thing that our society decides it has a right to lay its hand on.

0 thoughts on “People Vs. Indianostrum”