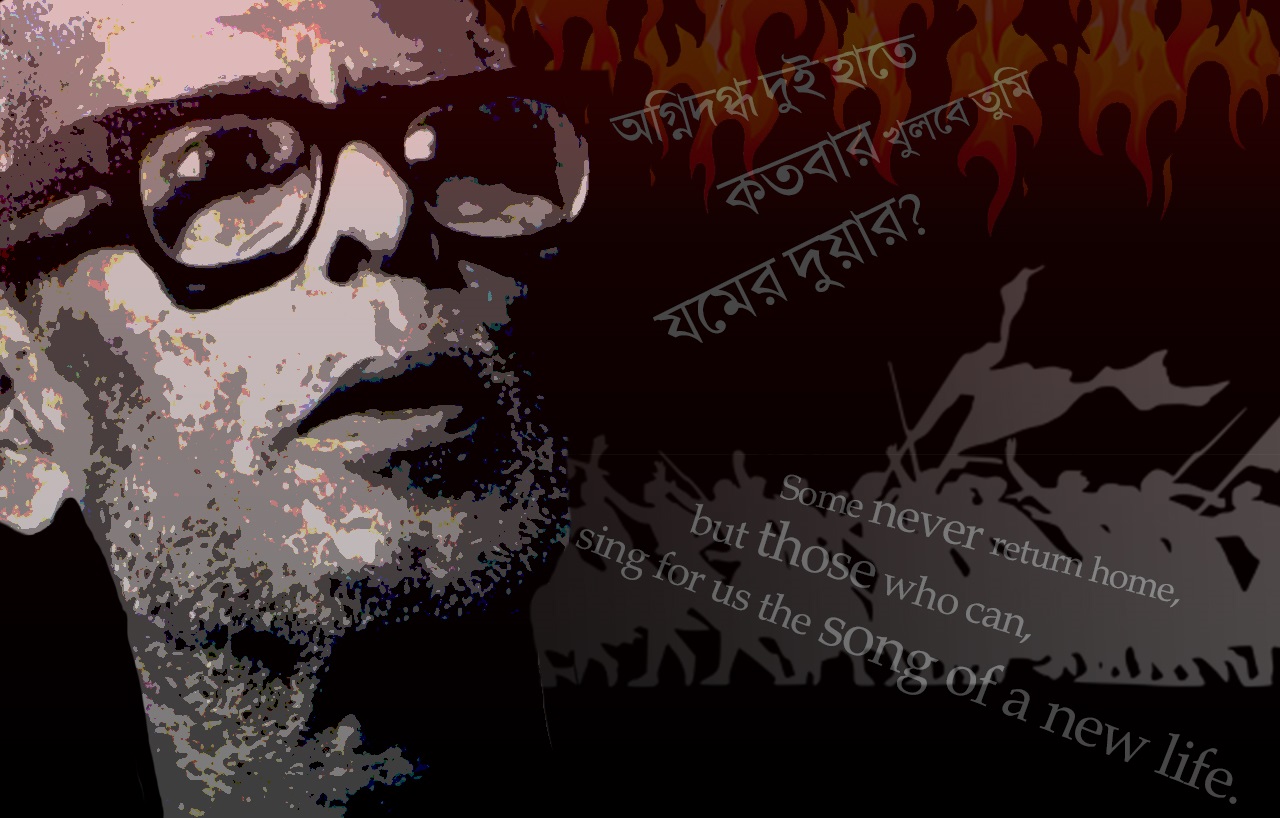 2 September is left-progressive Bengali poet Biren Chattopadhyay’s birthday. Last year this day marked the end of his birth centenary year. On that occasion, Nilanjan Dutta translated some of his poems to English, which were published in Groundxero. We are republishing them today, at Aainanagar.

American poet Robert Bly said about Ernesto Cardenal, the Nicaraguan revolutionary poet and proponent of liberation theology who passed away on 1 March 2020, “Cardenal’s poetry is impure, defiantly, in that it unites political ugliness and the beauty of imaginative vision.” We can say the same about the Bengali poet Birendra Chattopadhyay, whose prime concern in more than four decades of his literary life had been how to “hold one’s head high even in the midst of hell”.

Birendra Chattopadhyay was born a century ago in Dhaka on 2 September 1920 and died in Calcutta on 11 July 1985. Like Cardenal, five years younger to him, his poetic cognition was conditioned by ‘exteriorismo’ — the ‘ism’ based on real-life experience from our exterior world — which he tempered with his intrinsic courage of endurance. This gave him a temperance that steeled not only his poetry but also his spine, which prevented him from bending before power like many of his comrades who had started their journey in the progressive literary movement in the 1940s, when they attained their ripened age in the 1970s and ’80s. Always present at the rallies, demonstrations and protests with his towering figure and piercing poems, he remained the conscience keeper of the young cultural and political activists throughout this period, never letting himself and the people around him surrender to the descending despair. Then, “While singing the songs of love, one day his voice cracked.”

Shortly after, revolutionary Telugu poets, the late K.V. Ramanna Reddy and Varavara Rao, had come on a visit to Calcutta. They found the progressive literary scene in Bengal awash with emotions stirred up by the untimely exit of the poet and got interested about him. In course of a conversation, they urged me to translate some of his poems into English while they were in town. I did some quick translations and still remember how KVR was instantly touched by his spirit when he took them from my hand and began to read aloud. They insisted that I translate more, so that they could reach a wider readership. The result of their encouragement was the book Here Lies Your Motherland, published by Birendra’s younger son, Buddhedeb Chattopadhyay, in December 1985. A second edition has been brought out recently by Mitra Chattopadhyay. Here are the first few translations I did for KVR and VV.

For a poet who had left his roots on the other side of the border when India became decolonised and divided simultaneously in 1947, the most traumatic as well as unforgettable experience had obviously been the Partition. The pangs kept coming back to him again and again.

River of the Dark Frontier

I can’t see anything
When I go to drink water
From the river
That is darker than my weariness.

Yet as I hear it calmly
Chirrup
The strange expectations in my heart
Kneel down in prayer.

In the darkness of my palms
Shivers
An offering of tears!

‘Security of the state’ became the buzzword in Indian politics between the Sino-Indian war in 1962 and the war with Pakistan in 1965, which left a long-term impact. Even as the economy showed signs of weakness causing distress to the poor and the middle classes, it became difficult to talk about these things since all outspoken people, especially the communists and the pacifists, were in danger of being branded as ‘anti-national elements’. Confounding the situation, the Communist Party of India (CPI) split in 1964 – a major issue being whether to view China as the aggressor or not. The “nationalist” Press branded Birendra Chattopadhyay as a pro-China communist and stopped publishing his poems.

If Blood Spills into Your Mouth

If blood spills into your mouth
You will sin if you utter it now.
The enemy is present everywhere,
The ministers are spending sleepless nights:
At such a moment you commit a sin
If you vomit blood,
If you writhe in pain,
If you lie still in a pool of your own blood.

It was also the time when a food crisis was becoming acute and the common people were feeling the sting of hunger.

The Strange Savour of Rice

The strange savour of rice
Hangs in the night sky.
Some people still cook rice,
Serve rice, eat rice.
And we keep awake all night
Taking in the strange fragrance
At prayer, all the night.

A revolutionary wave began to sweep West Bengal and many other parts of India following the peasant uprising at Naxalbari in May 1967. The Naxalite movement drew its ranks mainly from the Communist Party of India (Marxist). However, it also attracted activists and sympathisers from many other Left parties and groups, including the Revolutionary Socialist Party (RSP) to which the poet belonged. Although an All-India Coordination Committee of Communist Revolutionaries (AICCCR) had been formed, the movement remained multi-centred and without a rigid structure until the founding of the Communist Party of India (Marxist-Leninist) or CPI(ML) on 22 April 1969. In the intervening period, the activists, mainly young, were greatly inspired by the Cultural Revolution in China and the global youth unrest, notably the May 1968 events in France.

Hard are the rites of the sun,
So I don’t keep awake writing poems in the night.
Yet I do not know whether poetry
Can be anything but hymns to the sun today.

To the trees of dawn and the rivers of dusk I ask…
They remain silent… Only the noon demands
a tribute of blood.

The state sought to drown the Naxalite movement in a bloodbath. Veteran Marxist ideologue and journalist Saroj Kumar Dutta and youth leader Ashutosh Majumder, both poets in their own right, were two of the countless victims of repression.

Are the executioners of the time
Who play with this century’s blood and mire
Rejoiced to slay you like a beast?
Or is it that the security of the state
Demands a sacrifice of the poet’s heart?

Peace then! Whose peace? A thousand dogs loiter
In the famished, yet regal Bengal

You are dead! For so long a time
Not a single poem did you write. For long
Wearing tattered clothes, like a mad man, you
Roamed in the country of the naked and the starved –
So you are dead – you’ve shed your clothes, your sins…

Even amid the intense state terror, some activists as well as relatives, friends and well-wishers of political prisoners mustered the courage to come out in the streets against the blatant violation of civil liberties. They were few in number, but relentless in their protests. The poet was one of them. Political prisoners in Alipore Central Jail, Presidency Jail and Midnapore Jail went on a hunger-strike from 17 May to 14 June 1974. Their relatives and friends also undertook a fast at Esplanade East in Calcutta and the Association for Protection of Democratic Rights (APDR) and Legal Aid Committee organised meetings and marches in solidarity.

1.
In my front and back, on my left and right
A few familiar faces;
A few teenagers
And mothers and sisters
Of children long-lost in jails.

2.
After a shower, the sky
Now looks up towards the sun. Their chorus
Bathes us in pain and pledges.
They’re searching for those words and sounds
That can give depth and meaning
To the blood in our arteries.
And yet, from the love filtered from their blood
When the words and sounds are born
Raising fists to the sky,
Those are nothing but condemnation, disgust,
Protest and demands
Of many a people in chains.
Yet those are more than that, because
There is no end to human experience –
After swimming for days through the sea of blood,
One knows hatred is but another name for love;
Stumbling night after night on the rocks of audacity
One knows, the other name for love is protest!

3.
Like a python, the convoy
Of Black Marias encircle them.
They are only a few in number,
Forsaken by their friends.
And yet they take to the streets
Remembering the faces
Of a thousand boys and girls
Bleeding from the blows
Of a brute and mighty power.

A state of Emergency was imposed in India on 25 June 1975 and all civil liberties were suspended. It continued till 21 March 1977. Not only the activists, but many well-known intellectuals were put behind bars. Some succumbed to the pressure and began to sing paeans for the regime. The poet wrote:

You order, and Galileo may write:
The earth doesn’t move round the sun.

And yet, it moves in its orbit
However much you may rant.

And here is a poem which I did not give to VV and KVR that day. I translated it much later. Today, I want to read it out to you, Varavara, wherever you are, in whichever dungeon they have dumped you, even as we scream for your release along with all political prisoners. It is one of the last poems of Birendra Chattopadhyay.

At the Thakurpukur Cancer Hospital

The struggle is between death and man
Since victory and defeat are both in the lexicon
None would step back without a fight.

Not only the doctors and nurses
Even people who are condemned to death know
There’s no point in surrendering.
With a firm conviction to drive away death
They too leave their footprints on the soil and the grass.
Some never return home, but those who can,
Sing for us the song of a new life.

Nilanjan Dutta is a journalist and human rights activist.